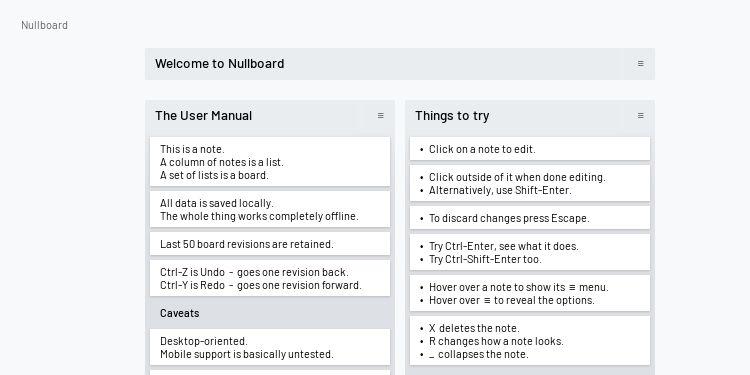 Nullboard is a minimalist kanban board, focused on compactness and readability.

Nullboard is a minimalist take on a kanban board / a task list manager, designed to be compact, readable and quick in use.

The name also happens to abbreviate to NB, which I think is a nice touch.

Still very much in beta. Caveat emptor and all that.

The whole thing is largely about making it convenient to use.

Everything is editable in place, all changes are saved automatically and last 50 revisions are kept for undo/redo:

New notes can be quickly added directly where they are needed, e.g. before or after existing notes:

Notes can also be dragged around, including to and from other lists:

Nearly all controls are hidden by default to reduce visual clutter to its minimum:

Longer notes can be collapsed to show just the first line, for even more compact view of the board:

Notes can also be set to look a bit different. This is useful for partitioning lists into sections:

Links starting with https:// and http:// are recognized. They will “pulse” on mouse hover and can be opened via the right-click menu.

Pressing CapsLock will highlight all links and make them left-clickable.

Lists can be moved around as well, though not as flashy as notes:

The color theme can be inversed and the font size can be increased:

You spot a bug, file an issue.

Nullboard is something that handles ToDo lists in the way that works really well. For me that is.

Trello wasn’t bad, but never was comfortable with the idea of storing my data in cloud without any actual need.

Wekan looked promising, but ultimately too heavy and had no offline usage support or a local storage option.

Things was beautiful, but not the right tool for the job.

Inkscape - I kid you not - with a laundry list of text items was actually OK, but didn’t scale well.

Ditto for the plain text files.

Pieces of paper were almost there, but rearranging items can be quite a hassle.

So finally got annoyed enough to sit down and write exactly what I wanted.

The 2-clause BSD license with the Commons Clause.

That is, you can use, change and re-distribute it for as long as you don’t try and sell it.

Convert PDF to HTML without losing text or format.

A few simple, but solid patterns for responsive HTML email templates and newsletters. Even in Outlook and Gmail.