Crackcoin is a very basic blockchain-free cryptocurrency PoC in Python. It’s a project for discovering cryptocurrencies.

Note that this is a PoC that runs only on local networks and does not provide proper security. The code should only be used to get familiar with the building blocks for a cryptocurrency. Also, crackcoin should not be confused with the (dead) currency CrackCoin (CRACK) from 2014.

This project was created as an exercise after reading “Mastering Bitcoin: unlocking digital cryptocurrencies”.

The purpose of this project is to have people learn about the basic workings of a cryptocurrency. I’ve tried to create a simple-as-possible framework to play with. The current code allows nodes to exchange coins on a local network.

In its current state the application does not handle consensus forks. Also, you can perform some double-spending attacks and easily out-mine other nodes. No smart transaction confirmation graphing is implemented to outwit blockchain implementations. However, this is the whole point. These methods are not implemented, but because the code is so simple you can easily try out ideas to see how and if they work. Thus, I hope that the project can be an addition to both complete beginners in the field of cryptocurrencies as well as researchers or advanced coders that want to test new ideas.

Most cryptocurrencies use a blockchain to validate transactions among other things. After years of running these networks it’s beginning to look like blockchain-based currencies naturally evolve into a centralised network, because it’s in the best interest of the participants to combine computing power to calculate solutions for blocks.

An interesting framework for a blockchain-free protocol is discussed in the paper “Blockchain-Free Cryptocurrencies: A Framework for Truly Decentralised Fast Transactions”, which can be found here:

Do note that crackcoin doesn’t implement nearly as complex a protocol as described in the paper. But the transaction-based mining method was used as an inspiration for implementing the ‘core’ for crackcoin.

The following steps will allow you to run the code on the local network and spend coins.

We’re going to need the code:

Then you python generateGenesis.py. This will show you something like the following:

What you’re seeing here is the base for a wallet. There is a private key, a compressed public key, and an address. We’ll change the code such that the genesis transaction is transferred to your wallet, so you can spend the coins. In this example, I’ll use the above values.

The first time you run crackcoin.py, a database is generated from the template crackcoinBase.sql. This file holds the genesis transaction, which is the first transaction for the currency. This transaction creates coins from thin air, and transfers then to an account.

Go ahead and open crackcoinBase.sql. There is one line that looks like this:

This is the genesis transaction, that transfers 31337 coins to address crackcoint3wMFe… Change this address to the address generated with generateGenesis.py. So in this example, I change:

If you ran crackcoin.py before, make sure you delete crackcoin.db after doing this edit.

Do a python crackcoin.py. This will create the database and a random wallet. Now type i. You should see a wallet with no coins. Now type q to quit, and wait for it to quit.

Now, with crackcoin shut down, open crackcoin.db (the database) with an sqlite database editor. You can use a GUI tool for this or just sqlite3. On OS X I like to use a tool called DB Browser.

Browse to the table called wallets, and change the private key, public key and address to the values you generated with generateGenesis.py. Save the database, close the tool.

Now if everything went well, you can python crackcoin.py, and if you type i you should see that your wallet now contains 31337 coins. Neat.

I’ll refer to our main node (that holds the genesis private key) as node A, and the other node we just copied the public directory to node B.

On node B, just python crackcoin.py from the public directory. If you then type i, you should see a generated wallet address for B.

On node A, type t to make a transaction. At To: you enter the wallet address for node B. At Amount: just enter a small number like 137. Now if you press i on both nodes, you should see that the coins are transferred. Sometimes you need to type b on node B to sync the two.

You can now transfer coins from device A to device B and back. Here is a screenshot: 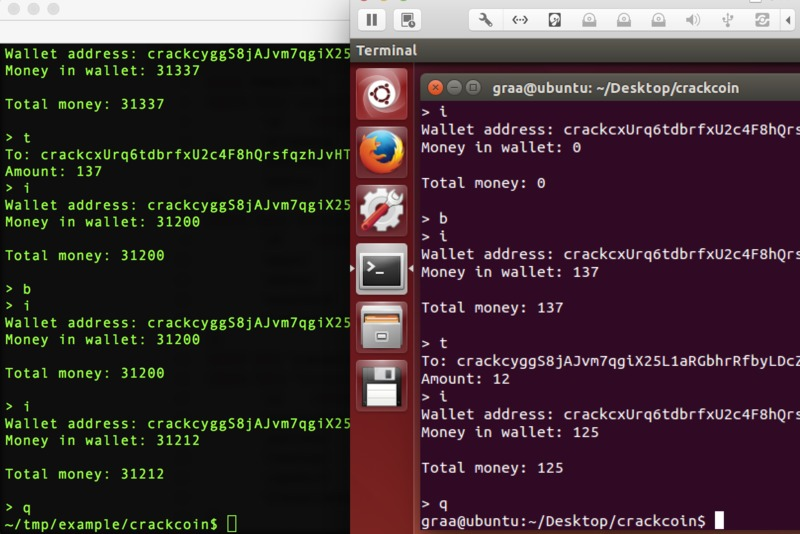 BayesDB on SQLite. A Bayesian database table for querying the probable implications of data as easily as SQL databases query the data itself.

Implementation of Graph Auto-Encoders in TensorFlow

get things from one computer to another, safely

Spoilerwall introduces a brand new concept in the field of network hardening. Avoid being scanned by spoiling movies on all your ports!