Update 10/13/19: Setting up the TensorFlow Object Detection API on the Pi is much easier now! Two major updates: 1) TensorFlow can be installed simply using “pip3 install tensorflow”. 2) The protobuf compiler (protoc) can be installed using “sudo apt-get protobuf-compiler. I have updated Step 3 and Step 4 to reflect these changes.

Bonus: I made a Pet Detector program (Pet_detector.py) that sends me a text when it detects when my cat wants to be let outside! It runs on the Raspberry Pi and uses the TensorFlow Object Detection API. You can use the code as an example for your own object detection applications. More info is available at the bottom of this readme.

This guide provides step-by-step instructions for how to set up TensorFlow’s Object Detection API on the Raspberry Pi. By following the steps in this guide, you will be able to use your Raspberry Pi to perform object detection on live video feeds from a Picamera or USB webcam. Combine this guide with my tutorial on how to train your own neural network to identify specific objects, and you use your Pi for unique detection applications such as:

Here’s a YouTube video I made that walks through this guide! 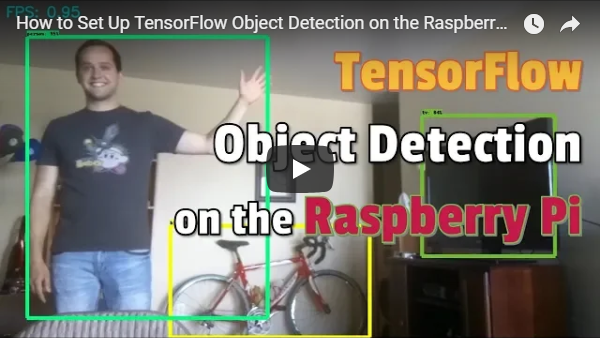 The guide walks through the following steps:

The repository also includes the Object_detection_picamera.py script, which is a Python script that loads an object detection model in TensorFlow and uses it to detect objects in a Picamera video feed. The guide was written for TensorFlow v1.8.0 on a Raspberry Pi Model 3B running Raspbian Stretch v9. It will likely work for newer versions of TensorFlow.

First, the Raspberry Pi needs to be fully updated. Open a terminal and issue:

Depending on how long it’s been since you’ve updated your Pi, the upgrade could take anywhere between a minute and an hour.

Update 10/13/19: Changed instructions to just use “pip3 install tensorflow” rather than getting it from lhelontra’s repository. The old instructions have been moved to this guide’s appendix.

Next, we’ll install TensorFlow. The download is rather large (over 100MB), so it may take a while. Issue the following command:

TensorFlow also needs the LibAtlas package. Install it by issuing the following command. (If this command doesn’t work, issue “sudo apt-get update” and then try again).

Alright, that’s everything we need for TensorFlow! Next up: OpenCV.

TensorFlow’s object detection examples typically use matplotlib to display images, but I prefer to use OpenCV because it’s easier to work with and less error prone. The object detection scripts in this guide’s GitHub repository use OpenCV. So, we need to install OpenCV.

To get OpenCV working on the Raspberry Pi, there’s quite a few dependencies that need to be installed through apt-get. If any of the following commands don’t work, issue “sudo apt-get update” and then try again. Issue:

Now that we’ve got all those installed, we can install OpenCV. Issue:

The TensorFlow object detection API uses Protobuf, a package that implements Google’s Protocol Buffer data format. You used to need to compile this from source, but now it’s an easy install! I moved the old instructions for compiling and installing it from source to the appendix of this guide.

Run protoc --version once that’s done to verify it is installed. You should get a response of libprotoc 3.6.1 or similar.

Now that we’ve installed all the packages, we need to set up the TensorFlow directory. Move back to your home directory, then make a directory called “tensorflow1”, and cd into it.

Next, we need to modify the PYTHONPATH environment variable to point at some directories inside the TensorFlow repository we just downloaded. We want PYTHONPATH to be set every time we open a terminal, so we have to modify the .bashrc file. Open it by issuing:

Move to the end of the file, and on the last line, add:

Then, save and exit the file. This makes it so the “export PYTHONPATH” command is called every time you open a new terminal, so the PYTHONPATH variable will always be set appropriately. Close and then re-open the terminal.

Now, we need to use Protoc to compile the Protocol Buffer (.proto) files used by the Object Detection API. The .proto files are located in /research/object_detection/protos, but we need to execute the command from the /research directory. Issue:

This command converts all the “name”.proto files to “name_pb2”.py files. Next, move into the object_detection directory:

Now, we’ll download the SSD_Lite model from the TensorFlow detection model zoo. The model zoo is Google’s collection of pre-trained object detection models that have various levels of speed and accuracy. The Raspberry Pi has a weak processor, so we need to use a model that takes less processing power. Though the model will run faster, it comes at a tradeoff of having lower accuracy. For this tutorial, we’ll use SSDLite-MobileNet, which is the fastest model available.

Google is continuously releasing models with improved speed and performance, so check back at the model zoo often to see if there are any better models.

Download the SSDLite-MobileNet model and unpack it by issuing:

Now the model is in the object_detection directory and ready to be used.

Okay, now everything is set up for performing object detection on the Pi! The Python script in this repository, Object_detection_picamera.py, detects objects in live feeds from a Picamera or USB webcam. Basically, the script sets paths to the model and label map, loads the model into memory, initializes the Picamera, and then begins performing object detection on each video frame from the Picamera.

If you’re using a Picamera, make sure it is enabled in the Raspberry Pi configuration menu.

Run the script by issuing:

The script defaults to using an attached Picamera. If you have a USB webcam instead, add –usbcam to the end of the command:

Once the script initializes (which can take up to 30 seconds), you will see a window showing a live view from your camera. Common objects inside the view will be identified and have a rectangle drawn around them.

With the SSDLite model, the Raspberry Pi 3 performs fairly well, achieving a frame rate higher than 1FPS. This is fast enough for most real-time object detection applications.

Now, when you run the script, it will use your model rather than the SSDLite_MobileNet model. If you’re using my model, it will detect and identify any playing cards dealt in front of the camera.

Note: If you plan to run this on the Pi for extended periods of time (greater than 5 minutes), make sure to have a heatsink installed on the Pi’s main CPU! All the processing causes the CPU to run hot. Without a heatsink, it will shut down due to high temperature.

Thanks for following through this guide, I hope you found it useful. Good luck with your object detection applications on the Raspberry Pi!

The Pet_detector.py script is an example application of using object detection on the API to alert users when a certain object is detected. I have two indoor-outdoor pets at my parents' home: a cat and a dog. They frequently stand at the door and wait patiently to be let inside or outside. This pet detector uses the TensorFlow MobileNet-SSD model to detect when they are near the door. It defines two regions in the image, an “inside” region and an “outside” region. If the pet is detected in either region for at least 10 consecutive frames, the script uses Twilio to send my phone a text message.

Here’s a YouTube video demonstrating the pet detector and explaining how it works!

Run the pet detector by downloading Pet_detector.py to your /object_detection directory and issuing:

Using the Pet_detector.py program requires having a Twilio account set up (see tutorial here). It also uses four environment variables that have to be set before running the program: TWILIO_ACCOUNT_SID, TWILIO_AUTH_TOKEN, MY_DIGITS, and TWILIO_DIGITS. These can be set using the “export” command, as shown below. More information on setting environment variables for Twilio is given here.

If you don’t want to bother with setting up Twilio so the pet detector can send you texts, you can just comment out the lines in the code that use the Twilio library. The detector will still display a message on the screen when your pet wants inside or outside.

Also, you can move the locations of the “inside” and “outside” boxes by adjusting the TL_inside, BR_inside, TL_outside, and BR_outside variables.

These instructions show how to install TensorFlow using lhelontra’s repository. They were replaced in my 10/13/19 update of this guide. I am keeping them here, because these are the instructions used in my video.

In the /home/pi directory, create a folder called ‘tf’, which will be used to hold all the installation files for TensorFlow and Protobuf, and cd into it:

A pre-built, Rapsberry Pi-compatible wheel file for installing the latest version of TensorFlow is available in the “TensorFlow for ARM” GitHub repository. GitHub user lhelontra updates the repository with pre-compiled installation packages each time a new TensorFlow is released. Thanks lhelontra! Download the wheel file by issuing: 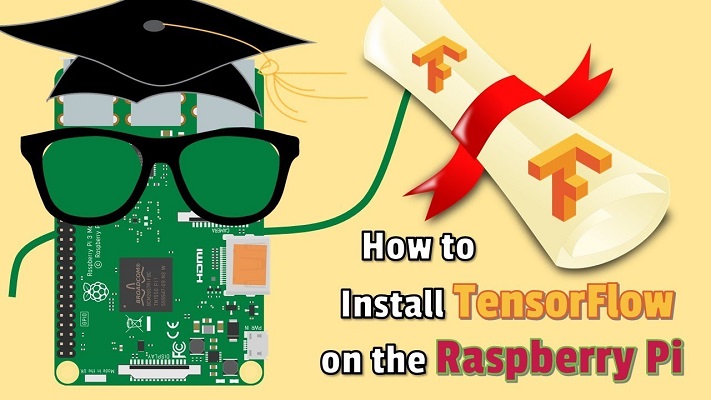 Now that we’ve got the file, install TensorFlow by issuing:

TensorFlow also needs the LibAtlas package. Install it by issuing (if this command doesn’t work, issue “sudo apt-get update” and then try again):

TensorFlow is now installed and ready to go!

Old instructions for compiling and installing Protobuf from source

These are the old instructions from Step 4 showing how to compile and install Protobuf from source. These were replaced in the 10/13/19 update of this guide.

The TensorFlow object detection API uses Protobuf, a package that implements Google’s Protocol Buffer data format. Unfortunately, there’s currently no easy way to install Protobuf on the Raspberry Pi. We have to compile it from source ourselves and then install it. Fortunately, a guide has already been written on how to compile and install Protobuf on the Pi. Thanks OSDevLab for writing the guide!

First, get the packages needed to compile Protobuf from source. Issue:

Then download the protobuf release from its GitHub repository by issuing:

If a more recent version of protobuf is available, download that instead. Unpack the file and cd into the folder:

Configure the build by issuing the following command (it takes about 2 minutes):

Build the package by issuing:

The build process took 61 minutes on my Raspberry Pi. When it’s finished, issue:

This process takes even longer, clocking in at 107 minutes on my Pi. According to other guides I’ve seen, this command may exit out with errors, but Protobuf will still work. If you see errors, you can ignore them for now. Now that it’s built, install it by issuing:

Then move into the python directory and export the library path:

Then issue the following path commands:

That’s it! Now Protobuf is installed on the Pi. Verify it’s installed correctly by issuing the command below and making sure it puts out the default help text.

For some reason, the Raspberry Pi needs to be restarted after this process, or TensorFlow will not work. Go ahead and reboot the Pi by issuing:

Protobuf should now be installed!

Simple and ready-to-use tutorials for TensorFlow

Simple and comprehensive tutorials in TensorFlow

A comprehensive list of Deep Learning / Artificial Intelligence and Machine Learning tutorials - rapidly expanding into areas of AI/Deep Learning / Machine Vision / NLP and industry specific areas such as Automotives, Retail, Pharma, Medicine, Healthcare by Tarry Singh until at-least 2020 until he finishes his Ph.D. (which might end up being inter-stellar cosmic networks! Who knows! )

Simple PyTorch Tutorials Zero to ALL!