Count the number of people around you :family_man_man_boy: by monitoring wifi signals :satellite:

Count the number of people around you :family_man_man_boy: by monitoring wifi signals :satellite:.

howmanypeoplearearound calculates the number of people in the vicinity using the approximate number of smartphones as a proxy (since ~70% of people have smartphones nowadays). A cellphone is determined to be in proximity to the computer based on sniffing WiFi probe requests. Possible uses of howmanypeoplearearound include: monitoring foot traffic in your house with Raspberry Pis, seeing if your roommates are home, etc.

Tested on Linux (Raspbian and Ubuntu) and Mac OS X.

It may be illegal to monitor networks for MAC addresses, especially on networks that you do not own. Please check your country’s laws (for US Section 18 U.S. Code § 2511) - discussion.

For a video walkthrough on how to install, checkout PNPtutorials.

Python 2.7 or preferably Python 3 must be installed on your machine with the pip command also available.

There are a number of possible USB WiFi adapters that support monitor mode. Here’s a list that are popular:

You need to dissociate from any AP before initiating the scanning:

Then update it so it can be run as non-root:

To run, simply type in

You will be prompted for the WiFi adapter to use for scanning. Make sure to use an adapter that supports “monitor” mode.

If Docker is installed locally and you want to take howmanypeoplearearound out for a quick spin, you can try the following:

NOTE: This Docker alternative is known to work on Ubuntu but not on Mac OS X. Feedback on other platforms would be appreciated.

You can modify the scan time, designate the adapter, or modify the output using some command-line options.

You can generate an JSON-formatted output to see what kind of phones are around:

A higher rssi means closer (one of these phones is mine, and the other two are my roommates' who were upstairs).

You can add --loop to make this run forever and append new lines an output file, test.json:

You can visualize the output from a looped command via a browser using:

Then just open up index.html in a browser and you should see plots. The first plot shows the number of people over time. Here you can see that people start arriving at work place around 8-9am (when work starts!). 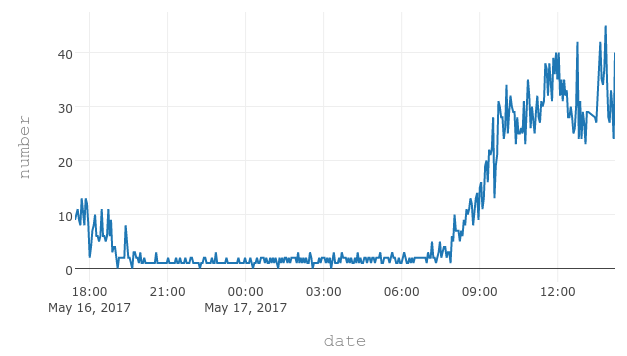 The second plot shows the RSSI values for the mac addresses seen. You can double-click on one of them in particular to highlight that trajectory, as I have done here for my phone (you can see when I leave from and when I arrive to work!):

How does it work?

howmanypeoplearearound counts up the number of probe requests coming from cellphones in a given amount of time. The probe requests can be “sniffed” from a monitor-mode enabled WiFi adapter using tshark. An accurate count does depend on everyone having cellphone and also scanning long enough (1 - 10 minutes) to capture the packet when a phone pings the WiFi network (which happens every 1 to 10 minutes unless the phone is off or WiFi is disabled).

This is a simplification of another program I wrote, find-lf which uses a similar idea with a cluster of Raspberry Pis to geolocate positions of cellphones within the vicinity.

Curated Tensorflow code resources to help you get started with Deep Learning.

Bring both Google Assistant and Alexa to your Raspberry Pi