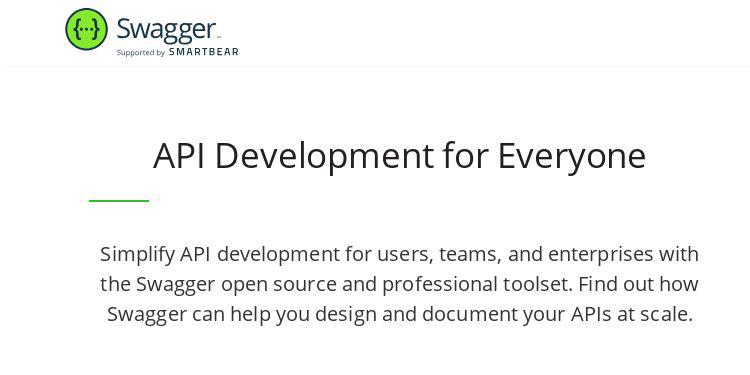 Swagger UI is a collection of HTML, JavaScript, and CSS assets that dynamically generate beautiful documentation from a Swagger-compliant API.

Swagger UI allows anyone — be it your development team or your end consumers — to visualize and interact with the API’s resources without having any of the implementation logic in place. It’s automatically generated from your OpenAPI (formerly known as Swagger) Specification, with the visual documentation making it easy for back end implementation and client side consumption.

🕰️ Looking for the older version of Swagger UI? Refer to the 2.x branch.

If you are looking for plain ol' HTML/JS/CSS, download the latest release and copy the contents of the /dist folder to your server.

You will need JDK of version 7 or higher as instructed here https://nightwatchjs.org/gettingstarted/#selenium-server-setup

Integration tests can be run locally with npm run e2e - be sure you aren’t running a dev server when testing!

Swagger UI works in the latest versions of Chrome, Safari, Firefox, and Edge.

To help with the migration, here are the currently known issues with 3.X. This list will update regularly, and will not include features that were not implemented in previous versions.

Please disclose any security-related issues or vulnerabilities by emailing security@swagger.io, instead of using the public issue tracker.

Simplified, self-hosted, version of breezypdf.com. HTML/CSS/JS in, PDF out, via Chrome